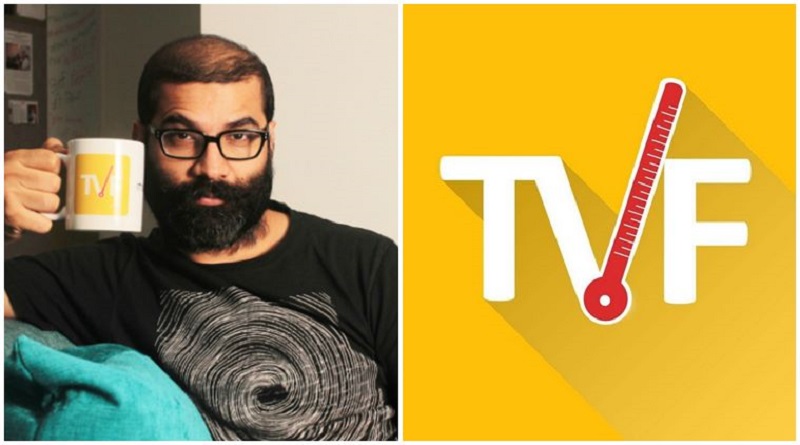 Indian television is impracticable! These never ending reality and fictional shows with crappy plots are no entertainment for the youngsters. With an idea to change the meaning of Indian entertainment in the mind of youth who scarcely watches television for amusement, Arunabh Kumar, aka The Qtiyapa Guy, started The Viral Fever Online Entertainment Network. Like many Indian children, Arunabh was destined to become an engineer. Then how did TVF come into existence?

Born in Muzaffarpur, Bihar, Arunabh comes from a family where people didn’t prefer watching television. After his schooling, he joined IIT, Kharagpur to become an electrical engineer. But he was born to do something unique. During the four years at IIT, he explored various career options that he could pursue. Every semester, his area of interest shifted from one thing to another. Films and movie making also drove his interests. But post IIT, the conventional thought process made him take up a job in US Air Force as a research consultant. On realizing that the job wasn’t his cup of tea, he left it after a few months.

In India, creativity is usually defined in terms of Bollywood. So, with an aim to do something creative, Arunabh started visiting various production houses looking up for a job. Finally, he landed up in Red Chillies Entertainment assisting Farah Khan in Om Shanti Om (2007). Red Chillies became his film school where he earned his media and film making education.

In 2009, he approached MTV with his show Engineer’s Diary. The show was rejected by the channel not because of its content but because of the Indian audience. It was thought that the audience would not watch it and hence, there was no sense in making it. But Arunabh was headstrong that he wanted to create a show with a mass-appealing content. He believed that he had ideas to make great content which would gain applause from the young Indian audience.

TVF Media Labs, started for branded content production, was already a well-established company. When he had enough money, he thought of making TV shows of his own that got rejected. He decided to make his shows online. And thus, TVF online network came into existence.

It took him time to realize that he wanted to enter the entertainment industry but when he started working with his creative spell of “Lights, Camera, Experiment”, he created an online television for the youth using internet and technology. Within a short span of time, TVF gained popularity amongst the audience. He has changed the way we all use YouTube for. Today, TVF is a team of about 70 people. They have more than two million subscribers and over three hundred million views on the YouTube channel. They have created a website and an app to host their shows and videos called TVFPlay. TVF covers topics like lifestyle, movies, social issues, Indian politics, etc. They have created some of our favourite web series like Permanent Roommates, TVF Pitchers, Chai Sutta Chronicles, Tech Conversations with my Dad, TVF Bachelors, etc.

Success story of Vijay Shekhar Sharma, the founder of Paytm

Design your Salad in 1.5 Lakh Ways – The Falhari Story

Author startupurbanPosted on December 14, 2019August 1, 2020
Founders – Gulshan Sharma and Rahul Shankar Website – Falhari What snack can you think of when you feel like munching or having something before or...
Read More

The Success Story of Harshil Mathur and How He Founded Razorpay

Author startupurbanPosted on January 2, 2022January 2, 2022
The digital atmosphere in India is currently growing at a very rapid rate, and along with that market, the rivalry is also growing. This...
Read More

Author startupurbanPosted on November 20, 2017October 20, 2020
Does the deteriorating air quality of the metropolitan cities concern you? Does the depleting ozone layer and increasing global warming affect you? Does the...
Read More

Author startupurbanPosted on October 6, 2017July 13, 2020
Most of the time inception of a startup is the story of your own life. Similar is the case of the IIM-A graduate, Amit...
Read More