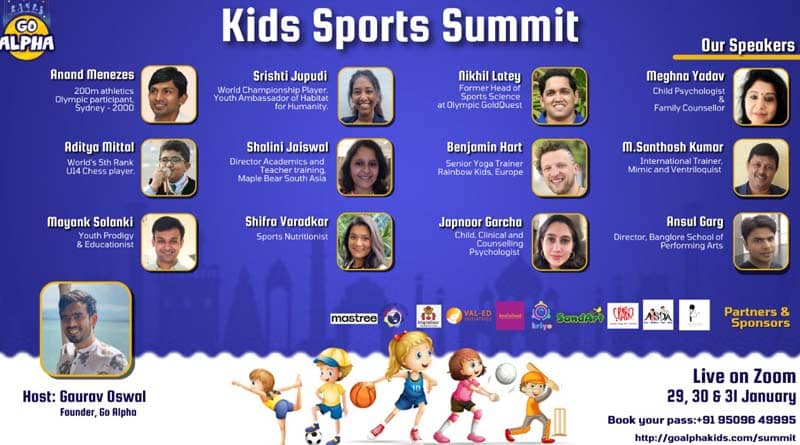 Kids Sports Summit is a platform to interact with sportsmen and gain meaningful insight into your child’s physical and mental development. From the 29th to the 31st of January, 2021, Go Alpha conducted their very first virtual Kids Sports Summit. Over 500 Parents, Kids, Principals, and Sports Enthusiasts attended this event, virtually, from their homes. The keynote speakers for this event ranged from India’s best sports personalities to educationalists from top-tier pre-schools. Go Alpha’s CEO and Founder, Gaurav Oswal, was the host of the event.

How to keep your child active until preschool restarts? How to choose the right sport for your child? How to Balance the mental well-being of your child in the new normal? These were some of the questions that were answered by professionals during the course of the summit.

The first day of the Kids Sports Summit was filled with fun, fervour, and curiosity. Anand Menezes, Olympian and manager of Indian Elite Athletes; NikilLatey, Former Head of Sports Science at Olympic Gold Quest; Benjamin Hart, Senior Yoga instructor from France and ShifraVaradkar, Nutritionist were the speakers for the day. Anand talked about the struggles he had to face while growing and the things he had to sacrifice to pursue his passion for sports. His feats and achievements, like the fact that at one point he ran even faster than Milkha Singh, were a great source of inspiration and awe for all the attendees.

Nikhil Latey talked about the importance of exploring new avenues of sports rather than focusing on specialization during the impressionable age of 3-12 years. He was followed by Benjamin, who conducted a virtual yoga session for parents and kids wherein he taught various possess and asanas that families could practice at homes. Parents had numerous doubts on the topic of nutrition as well. Shifra’s cleared those doubts and discussed methods to tackle picky eating habits in kids.

On the second day, Aditya Mittal, the world’s 5th Rank U14 chess player, and his mother started the session wherein they talked about his journey as a chess player. His mother mentioned multiple obstacles and compromises he had to make in order to pursue his love for chess while coping up with his studies. She talked about the importance of a parent’s support in their child’s life and how every parent should be more encouraging and welcoming towards their children’s hobbies. A puppet show, hosted by M. Santhosh Kumar, was followed after this session. With the help of his puppets, M. Santhosh taught various important lessons to kids on topics of health, behavior, and hygiene. It was an extremely interesting session that was especially enjoyed by the kids in the audience.

The last session for day 2 of the summit was a panel discussion on How to engage kids in this new normal. Panelists consisted of ShaliniJaiswal, Director of Academics and Teacher Training at Maple Bear South Asia; Mayank Solanki, Youth prodigy & Educationist; Meghna Yadav, Child Psychologist and family counsellor; and Ansul Garg, Director, Bangalore school of performing arts. It was moderated by Gaurav Oswal, Founder & CEO of Go Alpha. They examined how because of this pandemic and ensuing lockdown, numerous educators and guardians are finding it difficult to oversee children. This stale type of way of life has negatively affected their psychological and actual prosperity of kids, as increasingly more of them are feeling on edge. Guardians are additionally stressed over the absence of shared communication and its effect on their youngster’s social turn of events. They underscored the significance of the school climate as it profoundly affects the Emotional Quotient (EQ) of the children. Guardians have gotten some information about their youngster’s passion, mental, and actual state during these occasions. They should remember it to not power anything upon their kids. They are incredible heroes themselves for enduring this pandemic and ought to be adulated for it. All in all, rather than pressurizing kids, they suggested watching out for their turn of events and give them space.

The main speaker on the last day of the Kids Sports Summit was SrishtiJupudi. She is a World Championship Badminton Player and the Youth Ambassador of Habitat for Humanity. She discussed her excursion as a badminton player. How she adapted to her examinations while seeking after her energy for badminton and How she came to prepare an unbelievable mentor were a portion of the things she referenced during this meeting. She additionally talked somewhat about her experience on the worldwide foundation of badminton.

Then, there was a story telling session by FaridahSaith. Her meeting was loads of fun and the youngsters were incredibly intuitive. After this, there was a meeting on emotional wellness. The speaker for this meeting was JapnoorGarcha, who is a Child Counselor and mental health speaker. She discussed how to draw in children in an important way during these troublesome occasions. Stress and uneasiness are influencing children’s psychological prosperity and to adapt to that, she suggested different care methods that guardians can urge their children to take up. Guardians had a lot of questions and questions on this subject which Japnoor replied during the culmination meeting. We ended the session with an energetic Dance session conducted by Anshul. And thus, with this pleasant meeting, Kids Sports Summit 2021 came to a close.

VISAMAN - A Better way to Get your Travel Visa

Many prominent global brands are all set to join IGDC, the India Game Developers Conference 2019 in Hyderabad

Author startupurbanPosted on August 18, 2019August 18, 2019
Indiajoy and Telangana Government have recently announced their support for IGDC 2019, the 11th Edition of the Game Developers Conference in India. This conference is...
Read More

Budget 2019 announced some unexpected news for start-ups and MSMEs

Author startupurbanPosted on December 21, 2021December 24, 2021
Inspired by the success of the first edition of Vedix Beauty Festival “Soundarya” which received an overwhelming response, Vedix has announced to launch the...
Read More

Author startupurbanPosted on August 4, 2019July 22, 2020
UrbanClap Technologies India Pvt. Ltd, a Gurgaon-based start-up that operates home services marketplace, has led a Series E funding which is worth around $75...
Read More

Author startupurbanPosted on December 10, 2021December 10, 2021
In a recent abundance of electronic vehicles being rolled out by major companies- another one joins the list. This time, it’s a power couple....
Read More