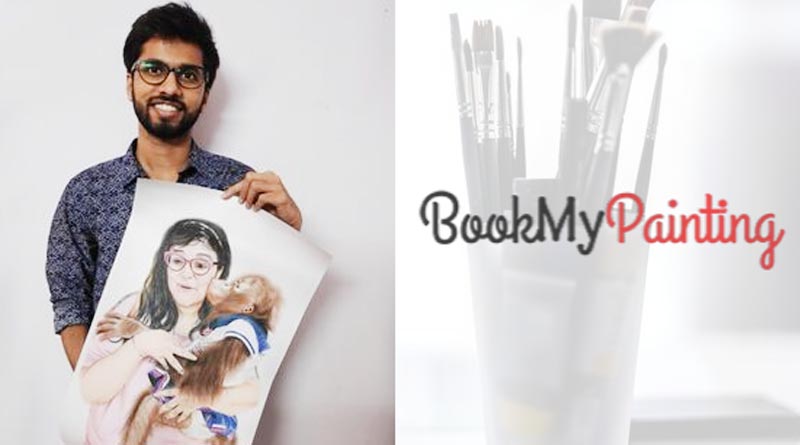 “Every child is an artist. The problem is how to remain an artist once we grow up.” – Pablo Picasso

BookMyPaiting, a startup which has turned this exclusive quote into a transforming reality and designed a platform where artists can actually live their dreams and also have financial stability while offering their artistic masterpieces to the people who are looking for it.

This exemplary startup is bridging the gap between the artists’ artwork and their non recognition. BookMyPainting elevates such artists from across the globe, allocates them new form of art, which eventually goes in the hands of the art seekers.

The advancement of technology has led people to go digital. They find it as one of the easiest mediums for interaction, whether it is knowledge, making friends, buying, and selling of goods. In the midst of technology, people started negotiating with their hidden strength i.e., creativity. Creativity is not only about art but about thoughts too.

Similarly, BookMyPainting is one of those thoughtful startups that has brought the culture of art and creativity on one common ground; has given a platform to those unrecognized artists who were hidden behind the market of visual art.

Harshit Soni, a 23-year-old Bits Pilani graduate, who gave birth to BookMyPainting and Shivam Mishra (Co-founder of AHA Taxis), who has supported this 3-year-old startup has manufactured a trend of physical artwork by bringing artists and buyers at this revitalizing domain.

They have empowered those artists who have crafty hands and visionary minds but do not have a platform to showcase their inbuilt talent; and evidently, this startup is making people realize the true beauty of art and helping people get real artwork, which these artisans bring on the canvas with their color stained hands.

There is no doubt that the “gig economy” has become one of the erratic trends. It works really effective for the people who want to make little extra money. The exclusive rise of digital platforms allows people to earn money by driving cars, delivering parcels, and likewise.

As per the Economic Times report, 70 percent of respondents from the hiring side have used gig workers at least once or twice for solving organizational issues in 2018 while there are several startups which instead of engaging full-time employees, contract with independent workers from different fields for short term engagement.

Bookmypainting is one platform that is helping students, housewives, retired people, and others pursue their talent and passion more productively by generating income, and that’s maturing the Indian gig economy.

Gig economy thrives on digitalization, penetration of the internet and advancement in information technology that has transformed the market dynamics across the globe today. While having a conversation about the objective of the startup and the future prospects, Soni said –

“The primary objective of creating this platform is to empower artists, housewives, and retired people by offering them home-based jobs. Since India has got little shady with respect to the unemployment rate, that is 3.6% as per the ILO’s World Employment Social Outlook and BookMyPainting will curb this unemployment factor and help in the country’s overall growth.”

He further added that “the idea is to project art as a mainstream profession in the marketplace.”

The company is continuously reforming the idea of art culture and letting artists explore different forms of art and techniques to make the end-user as happy as ever. At present more than 200 artists are working under the brand Bookmypainting, out of which 55% are women, who create beautiful handmade portraits upon customer demands.

Moreover, customers can buy handmade portrait or canvas artwork created by the artists at a minimal price of Rs. 500. Depending upon the customization and demands of the customers, the cost of the portrait may go as high as Rs. 22, 000. As revealed by Mr. Soni, Bookmypainting at present generates one crore rupees annually.

The Inspirational Journey of Ayush Mehra, A Digital Star

Author startupurbanPosted on August 2, 2020December 9, 2020
Ayush Mehra is a famous name in the Indian television industry at present. He is an upcoming model and actor known for his impressive...
Read More

Author startupurbanPosted on July 16, 2018August 14, 2020
Founder – Anuj Sehgal Website – Comedy Munch   What made you strike this business idea? What inspired you to start this company? Anuj Sehgal...
Read More

Author startupurbanPosted on September 28, 2017July 14, 2020
This has become a trend of today’s young generation to be an entrepreneur and create a successful startup. But this journey is not so...
Read More

Author startupurbanPosted on March 8, 2018July 22, 2020
Founder – Deepak Bansal Co-Founder – Devleena Neogi Website –  GingerCup Founded in: 2015 What made you strike this business idea? What inspired you to start...
Read More

Author startupurbanPosted on March 31, 2018
Co-Founder – Bhawani Bhateja Co-Founder – Gaurav Arora Website – BreatheFresh   What made you strike this business idea? What inspired you to start this company?...
Read More