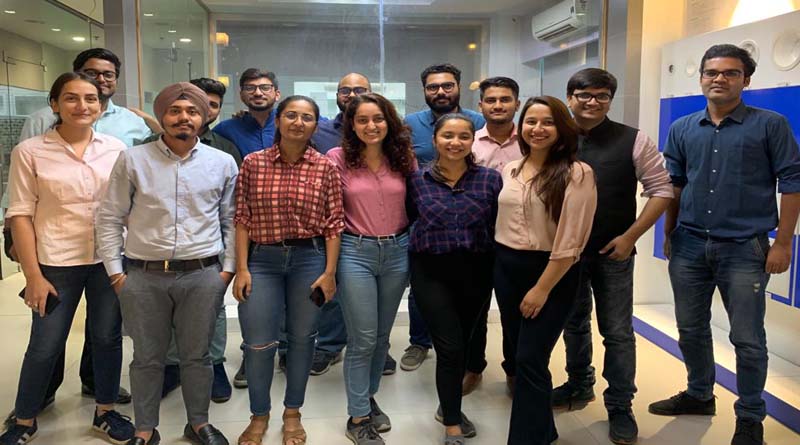 If you’re sleeping on innovation and business ideas, you might be surprised at what QuadB is doing. After all, wouldn’t you want to know how a company goes from a bootstrapped startup that started in college to being one of the biggest custom clothing manufacturers of India? The manufacturing industry is not an easy line to compete in, especially for young students just out of their graduation. That is precisely what gives this Chandigarh-based startup the freshness that every venture craves, and what makes people connect with them.

Right now, QuadB is on its way to becoming a household name within a couple of years after having made their initial start in 2014. They are custom-clothing manufacturers who take special pride in being the brand offering the most amount of customizability to customers of India. They’ve got an inspiring story, with lessons for younger startups in their nascent stages.

Customised clothing is a fast-growing phenomenon in the Indian setting. Various reports claim that the total market size for custom merchandise can grow from the initial 110 million customers that are present right now. Most of this demographic are divided into three categories, 20 million college students, 40 million of corporate employees and the remaining 50 million belong to the middle class. It is a hidden trade, but certainly, one that has a market of its own.

Taking The First Step
A journey has countless steps, from the start to the top, however, there is probably no step bigger than the first one. After encountering a distaste to the hideous t-shirts students were forced to wear for college fests, they had an epiphany. The entrepreneurial minds of Litesh and Bandhul, 2 PEC Chandigarh graduates, raced to the answer – Making these custom clothes themselves. Now, they had an idea, a prospective team and even their target market(college students, which it would remain for another couple of years), but there was the question of starting. It’s a well-known fact that industries and manufacturing isn’t an easy field to break into. Ludhiana is one of the biggest Industrial cities in all of India, and breaking into the industrial sphere there is a tough task.

Realising an idea into a tangible creation takes courage, promise and a little bit of craziness. The biggest challenge was to set up a manufacturing unit, one that was both affordable and efficient.
The answer had to be something out-of-the-box, or they had to uncover some hidden gold mine. It took some time, but eventually in 2014, their knowledge of Production Engineering paid off. After much research and hardships, they discovered some new techniques; namely JIT(sourced from Japan) and VAL(sourced from China). And that is how the journey started.

Money Matters
There’s no language as universal and essential as money. There are no surprises about how setting up an industrial unit takes resources and some serious cash flow. After taking their initial steps, it was time to turn their dreams from paper to reality as soon as possible. 2 graduates, fresh out of college with nothing but an idea and a plan in mind can do a lot. They decided to do this the authentic way – Bootstrapping. However hard it was going to be, they had belief in their product and knew this was a part of the process too.

In the early days, their bootstrapped nature helped them be thrifty and cost-saving, but soon enough, it became an exhaustive process. As much profit and popularity they earned, it all went right back into the growth and sustaining of the manufacturing units. For the growth and development of a young venture, it is important to nurture financial health properly. By 2015, they had started fulfilling orders from all over the country, and to clients in top institutions like IITs and IIMs. This growth demanded a jump to the next level.

Once they decided to upgrade their manufacturing units, they had started pitching their idea to people around them. Family, friends, investors and anyone willing to listen to them. Eventually, they found some people who saw the promise in their plan and ended up seed funding a good deal of money that helped them secure some essential machines and inventory. The amount of some 20 Lac INR was enough to help them scale production and take a substantial leap in their sales stats, taking them past their expected returns.

Soon enough, they managed to pay back every penny they owed and became a self-sustained firm.

The View From The Top
Every journey undertaken with consistent innovation and persistence is bound to end up happily. As did QuadB’s, when they are finally recognised as one of the biggest producers of customised clothing in India. After starting as a bootstrapped startup, they have finally moved on to bigger things, as is apparent by the Rs. 3 CR+ revenue they registered for the financial year of 2018. They have become an umbrella under which new ideas and startups can find space to exist. As well as launching various brands, they’re keeping their roots in their sight.

Anyone looking to grow their own business, or start an altogether new one can take some brilliant pointers from their story. Whatever they have been able to become today, is the result of their perseverance, creative zeal and hard-done research.
For an entrepreneur, there should be nothing as important to them as their idea. If the belief for their idea is strong enough, taking the hardest step(Starting) shouldn’t be hard. It is crucial to just start because everything else that comes your way can be handled. As the saying goes, ”You’re going to miss every shot that you don’t take.”
Take risks, embrace the world outside your comfort zone and keep going.

How Mamaearth Conquered The Earth…

Author startupurbanPosted on December 23, 2021December 23, 2021
Mama earth is the latest name in baby care brands that is Asia’s first brand with MadeSafe certified products. Another feat it has achieved...
Read More

Success story of Vijay Shekhar Sharma, the founder of Paytm

Author startupurbanPosted on March 29, 2017March 7, 2021
Paytm today stands as a huge company in India. However, there are very few of us who know about the struggle behind the success...
Read More