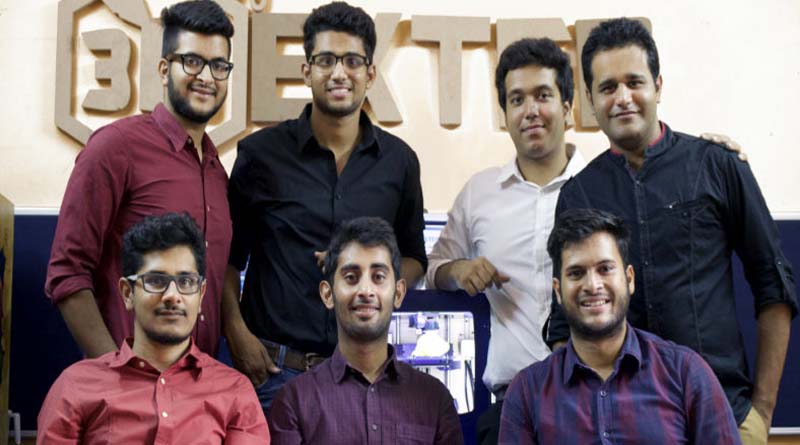 With the existence of 30 years of presence of 3D printing technology, the 3D printing in India is seen to be espousing the same from the past 2-3 years. The technology being in a prime use in different sectors such as automobiles, manufacturing, architecture, etc. the technology hasn’t been put into an efficient use in the areas of education and enterprise.

Looking at this scenario and an existing plan to do business together, Raunak and his 6 friends started off with research in the 3D printing market. They realised though the trend though is increasing hugely, it has not shown its effectiveness in the education sector. It is this idea that made them add experiential learning in schools. They initially tried capturing fashion and automobile industry but soon realised these areas were formerly developed with the same. The education set perfect for the seven to start with their startup 3Dexter.

The startup not just offered 3D printers in various schools but have introduced the 3D technology curriculum there. They have turned the simple computer labs into massive innovation with the presence of 3D printers, scanners, pens, designing software and much more. The 3D printing service has brought in a tremendous creativity, smart thinking and logical reasoning in the education.

The seven of them, Raunak Singhi, Nikunj Singhal. Smarth Vasdev, Shantanu Kwatra, Raghav Sareen, Naman Singhal and Partha Batra had a tuff journey to reach up to the idea. Every night they would discuss with different ideas and reject them off. Doing the same for long six months, Raunak came up with an idea of 3D printing. They realised this idea would not just bring an impact to the society but also create a difference in the education.

Working in an NGO, Make a Difference, they understood the problems every child faced. It was the lack of experiential learning and cramming despite consistent innovation in the education sector. So here, they used their technology to set aside both the problems and this is how 3Dexter came into the picture.

Introduction to a new curriculum

With an investment of 6 months, the seven friends formed a new program that involves subject integration, creativity, and problem-solving capacities. Designed for classes 3-9, the curriculum was adapted by CBSE, IB and ICSE boards helping the students learn their already existing subjects with a physical experience. They held various workshops to encourage their applicability. This boosted up their confidence, and there was no looking back for the 7 friends. They designed the printers and sold them in schools integrating the 3Dexter curriculum with the present subjects.

Gujrat and Bihar have immensely adopted the curriculum and have been a great support to using the innovated technology to enhance student education.

Currently, they have an annual curriculum in 10 schools with 50 workshops reaching out to 10,000 students. The company has raised $149 K from Ica Edu Skills Pvt Ltd. Raunak says bringing imagination to reality is the best way to get innovation. The newly set up startup is seen to be growing well changing the system of education to the positive.

How to enjoy life without spending huge!

Author startupurbanPosted on February 11, 2022February 11, 2022
Life has become a marathon where everyone seems to be running, and in this marathon of life people no longer wait for newspapers to...
Read More

Author startupurbanPosted on January 25, 2018April 17, 2021
Every start-up, every small or a big company or even individual service providers, in that case, have got through the problem of fraudulent clients...
Read More

Author startupurbanPosted on October 14, 2019April 19, 2021
UTHHAN, which means to uplift is an initiative of Golden Era Royal Group started in April 2012 to uplift the financially weaker segment of...
Read More

Hackerpost: Your one stop to Cyber Security and Crypto news

Author startupurbanPosted on March 10, 2019May 27, 2021
Founders –  Joel Mathew and Aditya Janu Website – Hacker Post Cyber Security and Crypto, quite possibly, are two of the most looked at...
Read More