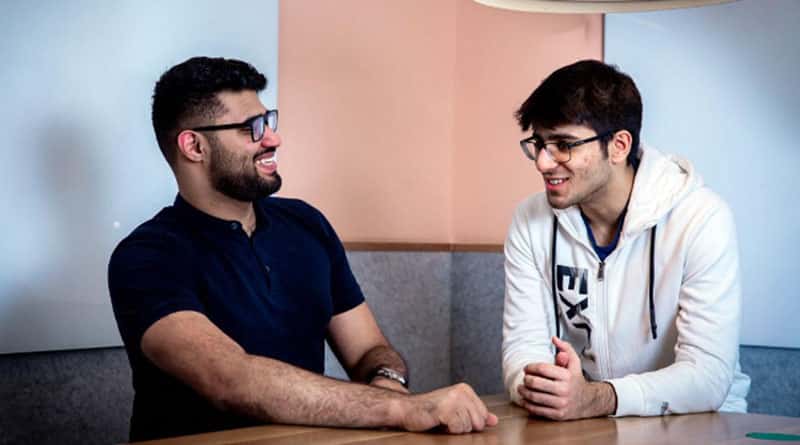 Imagine being a computer science student at Stanford University. Now imagine dropping out of said world-renowned university in order to pursue your startup which revolves around delivering groceries to users at an assured time limit of 10 minutes. If it seems improbable for even one student to do it, here is a story of two such students who actually implemented and achieved their dreams of launching the said startup.

Two nineteen-year-old teen entrepreneurs- Aadit Palicha and Kaivalya Vohra, Launched Zepto, an online grocery delivery platform. It was introduced to the Indian market in April this year. The two teen entrepreneurs have collaborated on multiple projects ever since school including a ride-hailing commuting service for students.

Together they founded Zepto, as described earlier, after dropping out of their computer science degree programs at Stanford University. Zepto assures grocery deliveries within 10 minutes for up to 90% of their orders through an exquisite network of dark stores and micro warehouses. Their services promise delivery of groceries under 10 minutes and offer customers flexible hours to order between 7:00 am to 2 am.

Aadit Palicha and Kaivalya Vohra have already been close friends in school days and used to play a lot of table tennis together. They both recognised their dream and passion for computer science and enrolled together at Stanford University’s CS program. Aadit and Kaivalya returned to their homes in Mumbai from Stanford University and faced some challenges getting groceries to be delivered in their area. But because of their entrepreneurial passion and zeal, they decided to drop out and the concept behind Zepto originated from their personal experiences and problems faced during the pandemic.

The skyrocketing requirement for home deliveries insured that groceries and other necessities would reach the customer in a matter of a couple of days. Thus, there was a market for instant delivery. Zepto swept in at the right time, thanks to its concept keeping the above requirement in consideration.

Palicha said that during the lockdown in 2020, the pair was troubled by the inadequate fulfillment of demand in the online grocery delivery sector. “I guess quite a number of the competitors in the space are either mis-executing grocery delivery or are eagle viewed on countless models, which is where we saw the opportunity.”

While Zepto was starting to get due attention from customers, Palicha and Vohra’s original startup KiranaKart not reaching the same customer base. The concept behind Zepto is, however, not novel. It was derived from KiranaKart as it was an online grocery delivery platform too. It had tie-ups with Kirana stores (local name for grocery stores in India) to deliver groceries within 45 minutes.

Zepto had successfully raised $730,000 in a pre-seed round. This round was majorly led by Global Founders Capital, Contrary Capital, 2 am Ventures, and other angel investors. Around that period, Vohra and Palicha were toiling to make the first 1.5 lakh deliveries at a surprising delivery cost of ₹1.

A dark store is defined as a small neighborhood storage area that consumers are not allowed to enter directly and are allowed to only order for home delivery. While dark stores are not a new concept, in the Indian market this model is yet to be explored and tapped into entirely, Aadit says.

“The extraordinary thing about this model is how we pack and deliver stuff in less than a minute. The final outcome is like any other online grocery delivery model.” Kaivalya Vohra believes that this concept was discovered after a lot of iterations. He considers that the online grocery delivery idea has been an interesting concept in India. “This model is something that’s done pretty well globally,” he adds.

On his pitch to convince investors, he says that the investors were simply requested to order something themselves once. They believed that the experience of using Zepto’s platform would suffice to convince everyone that their startup was going to be “the next big thing”.

Zepto declares its network is highly optimised- using location intelligence and geospatial data, including geography, demography, road patterns, traffic dynamics, weather, last-mile supply availability, real estate prices, etc. Moreover, the cold rooms and dark stores, which are integral to the start-up’s functioning, are custom-designed to control the requirements like the ease of travel, ease of navigation, allowing Packers to move as quickly as possible, and to pack things in the required order.

The most recent funding successfully received by Zepto amounted to $100 million which was led by its existing investor Silicon Valley startup incubator Y Combinator’s Continuity Fund. This currently values the company at $750 million.

Author startupurbanPosted on September 28, 2019September 28, 2019
Founder – Manish Gupta Website – Uincept How beautiful is it to share your experiences with people who have the same dreams as yours?...
Read More

Author startupurbanPosted on January 4, 2022January 4, 2022
Koo is an Indian microblogging and social networking service based in Bangalore. It is used for connecting, commenting, and engaging on social media in...
Read More