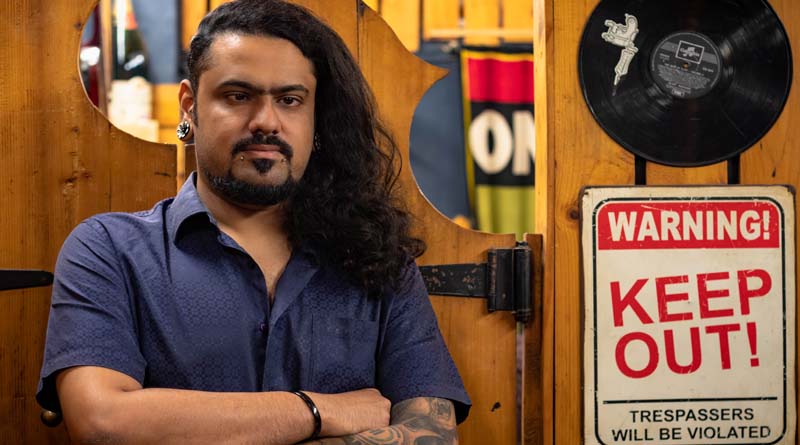 “All of us dream of achieving something in life, but it’s the passion and perseverance that helps you to achieve it.” – Ketan Saindane

Passion has been fuel to his success. Drawing was his love and passion since childhood, and despite his low vision, he always practiced it. A pencil and paper was all he needed to go into his creative zone, away from the world of Trigonometry and Pythagoras theorem. He mastered the art of drawing so well that he even represented his school on several occasions and won competitions for them.

By the time he cleared his school exams, he cleared about what he wanted to do.

Ketan wanted to be an artist. A tattoo artist to be precise!

Ketan immediately joined Art course in L.S.Raheja School of Art after his Graduation. It was a five-year course, and he was looking forward to immersing himself in the world of art. And boy, it didn’t disappoint him one bit. He learned so much about art that there were days when he would stay back in college just to work on some creative stuff. It was also a great leveler for him because he realized that everybody was an equally good artist. We had a healthy competition between us and learned a lot from each other.

The beauty of art is once you learn the fundamentals, everything – right from walls, books, and desk becomes your canvas. Ketan found tattoo making to be an interesting form of art. He have seen old women with their husband’s name tattooed on their forearms; He had seen people making tattoos with rudimentary equipment on railway platforms. Tattoos interested him, and he decided to explore the field further. The sad part was no one could teach me to make tattoos. So, armed with the power of the Internet, he decided to learn it.

The transformation from a creative brain to an engineering mind

The major disadvantage of our education system is it never ignites curiosity in our mind. By the time we reach our tenth grade, we have to choose between arts, science, or commerce. There can never be a mid-way. His decision to learn tattoo making introduced to the engineer within him, which he was never aware of until he was in school.

While researching on tattoo making, he realized that you need a tattoo-making machine to make a tattoo. The problem was such machines were not available in India. And if he had to import it, he probably would have needed to donate his kidneys!

So, in a split of a second, the engineer within me sprung up, and he decided to create his own tattoo machine! Now, those were the days when the Internet had just started making a way into our lives. There was very limited information available on the internet. He knew the basic components that were needed to build it, so he found a fabrication workshop and befriended the laborers who slept in the workshop after work to teach him to develop the machine. He would daily visit them after college and bribe them with food to learn the process. Within a couple of months, he learned to develop a machine like a pro!

When nothing works, do jugaad

Now that he knew how to develop a machine, the next step was to use his designing skills on someone. He could not start on human skin immediately, so he carved designs on fruits, Vegetables, rubber pads and so on to learn the process. Once, he gained confidence, he experimented on my friends. However, as with any unconventional business, he had a hard time finding clients. This was in the early 2000s when families and offices considered tattoos as taboo. He was desperately in need of clients. One day, while traveling by train, he came across a poster baba who guaranteed that he could solve any problem. A crazy idea cropped into his mind, and he immediately called on the number given in the advertisement. After explaining what he do, the baba agreed to send his clients who wanted a mantra or God’s tattoo to him. The arrangement worked well, and they worked in partnership. One thing led to another, and he started earning a substantial income even as he was studying. He realized that you have to try every trick in the book to succeed. The call center culture, and the LA Ink and Miami Ink shows also had a great influence on youth. They were open to experimentation. He would go wherever his clients would call him – garage, hotel, etc. By the time he completed his education, he wanted to operate from a studio. His family, who were unaware of his passion, were surprised when he announced his decision to them. They wanted him to pursue animation as he was good at it and it was a safe career. However, he was adamant. With the amount saved from his tattoo expeditions, he rented a small place near his vicinity and started operating from there. Thus, started the formal journey of Inkholics. Even today, the studio is open from 16 – 22 hours a day and is operational day and night for all kind of tattoo lovers. He made more friends than customers in these 15 years. There has never been a single working day in my life.

Knowledge sharing – the right destination to take your dream to places

February 2011, it was a normal day at Inkholics. He was making a tattoo when he had a sudden blackout. He lost eyesight. The next one & half year went in making rounds at the hospitals. He had multiple surgeries, 40 stitches in his eye. He could not eat or sleep. His dreams were shattered as he could not tattoo anymore. He still get Goosebumps when he think of those depressing days. One day, as he sat on his bed talking to himself, he envisioned a seed that grew into a sapling and then a tree that gives sweet juicy apples. He dreamt of how he would request my relatives and friends not to throw the seeds and instead give it to him to sow it and produce more apples. Prophetic as it might sound, he drew a parallel between his vision and his passion for making tattoos. He thought of mentoring tattoo artists and teaching whatever he learned all these years. The vision taught him a vital lesson – it’s important to share your knowledge to expand the reach of your dream.

He may have lost his eyesight, but he haven’t lost his passion or his fore sight for making tattoos.

He will continue to be associated with it in some way or another forever!