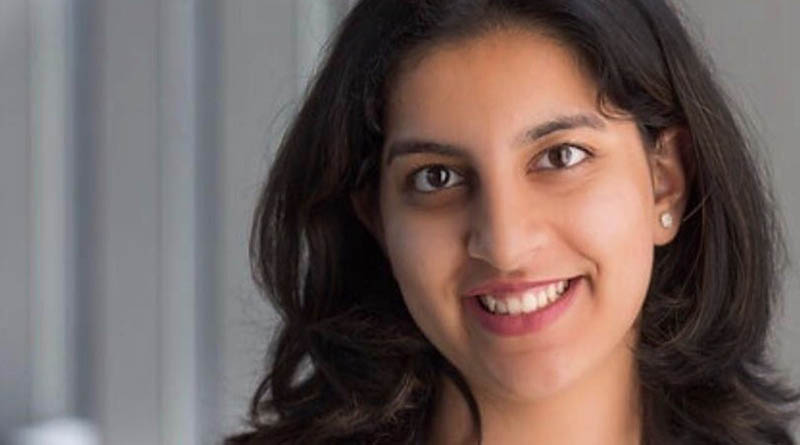 “If you always try to be normal, you will never know how amazing you could actually be” – Maya Angelou.

Harshita Arora, a 16-year-old teenager from a small town of Saharanpur in Uttar Pradesh, proved this quote right.When teenagers of her age were worried about completing their schooling and getting a degree; Harshita dropped out of school moving towards something innovative. She was instead engrossed in learning the development of newer technologies in the field of artificial intelligence. Her very first project was based on cryptocurrency price tracker. This app was so popularly liked by people that it now ranks second in the top paid apps list. It appears under the finance section of the Apple’s app store.

Harshita is not from research or a scientist family. Her father instead works as a stockbroker. Her mother is a homemaker. Despite being from a different background, their support has been constant in terms of her growth.

Her inspiration for coding was from her computer science professor who used to focus a lot on the design principles. She mentions in the interviews that her teacher would give them a lot of assignments around designing posters. It was these projects that hooked her to the understanding of concepts behind developing an application. She began reading multiple IT magazines and kept on updating herself with the latest development in this field. She also took an interest in learning about cryptocurrency and how it works.

The journey from dropping out of school to coding iOS application

Harshita, the brains behind Crypto price tracker, has been different from her peer group. Her interest in developing apps budded when she was just 15. She learnt the development skills at the age of 13. After completing her 8th standard, she decided to quit her school. Later on, she opted for homeschooling but eventually at the age of 14; she gave up on that too.

She mentions that the reason behind quitting homeschooling was – “Exams.”Even for homeschooling, students give exams at the year-end. But Harshita, the successful app developer felt she could do better if she did not follow the traditional schedule of giving exams. She has always been someone with bigger dreams possessing all the needed confidence and determination to fulfil them.

In 2016, she cracked an internship with Salesforce in Bangalore. Later in 2017, she was fortunate to get a call from the Massachusetts Institute of Technology (MIT) for the MIT Launch. It was a 4-week entrepreneurship programme organised for the age group of 15-19 years. This is where she got an opportunity to do real-world engineering. It acted as a stepping stone for her decision to code an iOS application.After coming back to India, she researched how to make iOS apps and explored swift programming.

She realised that she was happier in developing a crypto price tracker. To go about it, she read a lot about cryptocurrencies initially. Harshita felt that the existing apps were not up to the mark. And thus, she would develop that perfect app.

Crypto price tracker was Harshita’s first solo project. She worked on developing the app for two months. Her first application finally went live on 28th January. Within 24 hours of launch, the app caught the attention of the entire world. It ended up ranking second in the finance category on the app store and in the top charts for paid apps of the United States and Canada.On the very first day of launch, the app received 240 downloads, and within a week it received 1000 downloads.

Here’s a gist about her first application

How did she achieve it?

Harshita mentions that internet has been her canvas and Quora acted as her Bible. She gained a huge chunk of knowledge from the question and answer site Quora. Today, she possesses around 1700 followers on the platform. She also shares her learnings through the medium posts. The site rates her as one of the top writers under their design category section. She has over 2700 followers on this platform.

But that was not it. Harshita has made sure to make sure of the social media to the fullest. She mentioned that she used to post her queries on Facebook too. People in her network would connect with her and guide her.

She also appreciates her mentor connects from MIT Launch. Fortunately, she had Danielle Strachman and Michael Gibson, who run the 1517 fund in the United States. This fund focuses on the teenage start-ups only helping and encouraging the teenagers for their start-up businesses.She appreciates the fact that her mentors have helped her with things that she never thought of. Right from coding to sending snippets, she has gained constant support. Harshita also widely makes use the tool named “Codementor.io”.

What’s due next in her plans?

Her next project planned is based on “Image recognition and AI”. She is keen to develop applications under Food AI, something like a food recognition app that can identify food types through an image. This app aims to help the users get a break down of the ingredients and nutrients that the food may have. Majorly, the application would be a boon for people who suffer from food allergies.

Moreover, she plans to dive deep into the brain-computer interfaces (BCI) section too.

The daily routine of the young programmer, Harshita.

She feels start-ups are super fascinating having a rewarding process.  She believes they are much better than a 9 to 5 job.

The 17-year-old programmer has constantly gained her family support. This continuous support has made her a successful scientist, and an entrepreneur. Harshita is someone with big dreams who wants to dive deep into designing and developing software’s that people can use. To her, it is the most intellectually satisfying and meaningful thing to do in life.

Cheers to her upcoming projects!

Author startupurbanPosted on May 4, 2017March 10, 2021
Have ever thought of choosing an unconventional career path about becoming a “Chai walla” (tea maker, male) or “Chai walli” (tea maker, female) in...
Read More

How NeoBiz is poised to transform sales management for SMBs

Author startupurbanPosted on June 11, 2021June 11, 2021
Website – Neobiz.app Founders – Ankit Kumar Agrawal, Arpit Khandelwal During this global pandemic, we are forced to stay at home, as businesses are...
Read More

Saving your electricity bill is easy with Loom Solar