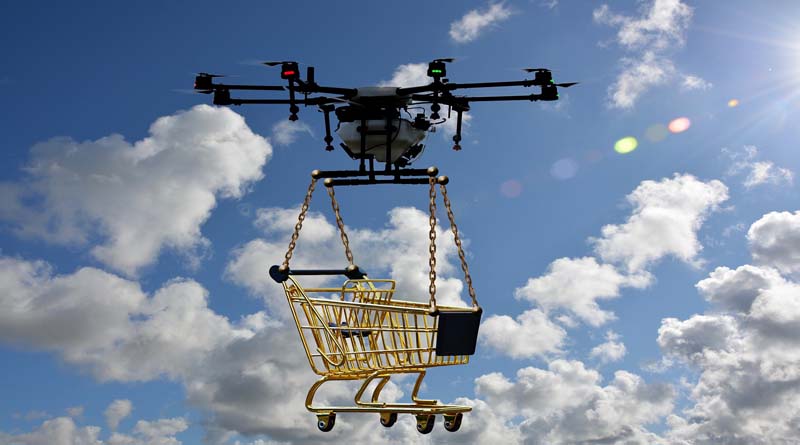 We all remember the iconic scene of 2011 released Bollywood film ‘3 Idiots’, where Rancho was flying an object which was controlled by a remote from the ground in the college hostel. Eight years later, in 2019 one day, you may find that something like that is landed in your house to deliver your online ordered food. This flying object can be called in any name like quadcopter, quadrotor or drone. All of these can be categorized under Unmanned Aerial Vehicles (UAVs). These are currently used by Indian defence establishments and other government organizations for intelligence and surveillance projects. But food delivery via drones may sound crazy, but they will soon fly high in India. If it happens, drones will change Indian Ecommerce logistics forever. Australia has already started this service.

Let’s dig deep into this exciting topic, Drone services. According to DGCA, it is an unmanned aircraft. This is the technical term. Drones are more formally known as unmanned aerial vehicles (UAVs) or unmanned aircraft systems (UASes). Essentially, a drone is a flying robot that can be remotely controlled. It flies autonomously through software-controlled flight plans in their embedded systems, working in conjunction with onboard sensors and GPS.

Directorate General of Civil Aviation (DGCA) is basically a regulatory body in the field of Civil Aviation. It is responsible for the regulation of air transport services to/from/within India and for enforcement of civil air regulations, air safety and airworthiness standards.

Initially flying Drones was not legal in India for civilians or commercial purpose prior to 2018. But looking at the world’s leading economically nations like the USA, China where drones are used across various sectors like health, agriculture, disaster relief, defense, India is also thinking of starting this service. The Indian government was seemingly moved with the times when it comes to drone technology. Indian government changed its drone policy on august, 2018. From 1st December, companies and individuals will start using and operating drones. The Directorate General of Civil Aviation’s new policy is called Drone Regulations.

1.0 provides guidelines for how unmanned aircraft will be allowed to operate within the country. Within the policy, the Ministry of Civil Aviation has started the registration process for companies and individuals who want to operate drones in all areas, except few due to security reasons. In this policy, drones are classified into five types according to their weights. Drones which are heavier than 2 kg will require registration and permits to fly. These drones can be operated only by pilots who have cleared DGCA-approved training. DGCA released the draft Drone Policy 2.0 on 15th January 2019. This is a recommendation, and the policywill be finalized by a task force led by the Civil Aviation Secretary and the Director-General of Civil Aviation. Moreover flying drones are prohibited in some zones. They are called “no-drone zones.” It includes areas like airports, international border, sensitive area, strategic locations and vital military installations. A case under the IPC can be filed for flying a drone in areas.

According to the source, the recent development in a drone is demanded by multiple food delivery companies such as Zomato and Swiggy. Recently Zomato successfully tested its maiden drone delivery technology. According to them, the test result showed that the drone took only 15 minutes to reach a delivery point where a bike fleet took 30.5 minutes to deliver. US-based e-commerce dominant Amazon has used a drone to provide a bag of popcorn to an address in rural England in the first commercial outing for a technology that is the US group’s boldest step towards automating deliveries.

On the other hand, drone manufacturers are not entirely happy on the policy because according to a Bangalore based drone Manufacturer Company, there are certain drawbacks on the policy. For example, drones with a payload of more than 2 kg come under medium and large segment, which means it requires permission every time before its operation.

This forward-thinking step by the government, and will change the whole delivery model. The employment scenario in India was not good for the last few years. In this situation, many qualified youths under-employed them in the manual delivery system. The recent changes may throw them into unemployment and uncertainties.

Top Tips For Choosing The Right IT Firm

Author startupurbanPosted on December 23, 2022December 23, 2022
You will come across many companies when looking for the ideal IT firm to work on your custom-built software. Most of the agencies claim...
Read More

Author startupurbanPosted on November 27, 2021November 27, 2021
Women entrepreneurs are on the rise and there’s no stopping this long-awaited revolution. When it comes to starting and managing a business, women form...
Read More

Author startupurbanPosted on June 11, 2022June 11, 2022
When you are an online retailer, you need to emphasize your packaging much more than you might think. After all, it’s one of the...
Read More

The Guide to Attracting Angel Investors for Startups

Author startupurbanPosted on February 2, 2022February 7, 2022
Every startup needs to secure funding from a credible investor to grow its enterprise. A startup may pursue different sources of investment to secure...
Read More