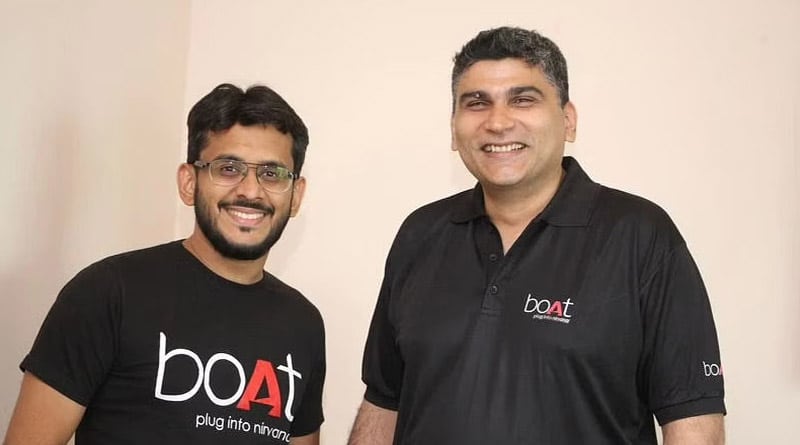 As a matter of fact that earlier music systems were not portable, people wanted gadgets that can be carried while travelling . This was the idea behind the electronic startup boAt founded in 2016 with the aim of bringing out affordable, fashionable headphone and earphones that resulted as a portable alternative to the traditional music system. boAt having a amazing and impressive collection of earphones, earbuds, headphones and wireless speakers, stands apart from the music market due to their best quality, affordability and wold-class designs and services that the company offers.

Founded in the year 2016 by Sameer Mehta and Aman Gupta, boAt is renowned and considered as India’s no.1 earwear audio brand as well as boAt emerged as 5th largest wearables brand all over the world since December 2020.  The founder Sameer and Aman wanted to make a lifestyle brand that would serve chic and fashionable music products and accessories to the new generation youths which basically acted as the brainchild behind this idea of launching boAt. Initially the company started its journey with just cable manufacturer and seller, but with time boAt had a rapid growth to serve around 800,000 customers, as in the year 2020. boAt began its venture from scratch wit a capital of 3lakhs invested by the founders.

In the year 2019, after completing two years of serving people with headphones, earphones, travel charges and cables, boAt has reached more than 100 crore sales in India itself. In the same year, it developed to a team of 25 member from just two founders in the beginning and opened its offices in Delhi and Mumbai. boAt signed up for celebrity brand ambassadors, and developed a community of 800,000 boAtheads.

According to the Registrar of Companies(RoC), boAt FY2018 revenue grew to Rs108 crore from FY2017 revenue of only Rs27 crore, that is thrice the growth it had in 2017. boAt claims that currently it sells 6,000 product each day with four product sold every minute and even adds one boAthead every three minute. Boat is loooking forward for a sale of Rs500 cores in the coming five years. boAt  doubled the growth of its revenue, which rapidly grew from Rs704 crore in FY2020 to Rs1,531crore in FY2021. boAt turns out to be a first ever Indian D2C brand to set for Rs2,000 crore IPO, which intends to file its DRHP and SEBI in the end of January 2022, as per the reports dated January 18, 2022. The company is looking forward for new and fresh issue of share and proposal for sale, bot of which is worth Rs1,000 crore each.  boAt’s growth is further driven through its distribution partnerships. Apart from selling on Amazon, Flipkart, Myntra, and Jabong, now the company has started retailing in Croma outlets that has accounted over 20 percent of its sale. boAt is looking forward for more distributor tie-ups in South India. India based audio brand, boAt has developed a series of ‘Make In India’ wired and wireless earphones as well as mobile accessories along with its top best sellers such as Bassheads 100, Bassheads 152 and Rockerz 255 Pro, which are manufactured locally as well as on the website. In 2019, boAt’s product were displayed in the Lakme Fashion Week in Mumbai where only boAt accessories were sported on the models walking down the ramp for one of the designers.

In 2019 Mar, boAt raised its first funding of Rs6 crore from Firesides Venture, an early stage VC firm that backs consumer brands. In the same year, InnoVen Capital invested Rs16 crore in the audio and accessories brand, boAt. In the year 2021, boAt has raised around $100 million funding from an affiliate of Warburg Pincus, a leading global private equity fund focused on growth investing. The investment done by Warburg Pincus will help and empower the company to further encourage its leading market position, extending its R&D abilities and product portfolio and supporting the boAt’s effort to develop a manufacturing ecosystem for the ‘Make In India’ initiative. Recently, in the year 2021, boAt raised a Series B funding of $6.68 million from Qualcomm Ventures. Being an digitally Indian brand, boAt has seen breaking boundaries of sectors that are mostly dominated by well-known global brands, making a place for India in global maps. Avendus Capital, being the only financial advisor to boAt, helped and supported the manufacture of products in India. These funds helped boAt develop and build new product in order to increase its customer base. The company increased its profits by 61% to Rs 78.6 crore in FY2021 from Rs 48.85 crore, which was seen in FY2020.

The company believes that there is a trend of buying earphones along with new smartphones, so as the matter of fact, boAt finds this concept as a source of success for their company. As per the reports, several significant mobile make are in the process of collaborating with different audio companies. For example- Samsung has JBL and Harman, Apple has Beats and so on.

Wow Momo - A Journey From Rags To Riches

Looking for Aesthetic Furniture? Saraf Furniture is the stop shop!

Author startupurbanPosted on June 1, 2020July 11, 2020
Founder – Raghunandan Saraf Website – Saraf furniture The journey of this company started about 40 years ago with the manufacturing and trading of...
Read More

TruckSuvidha – The Ola of trucking Industry!

BunnyBash – A Boost to the Party eCommerce Industry