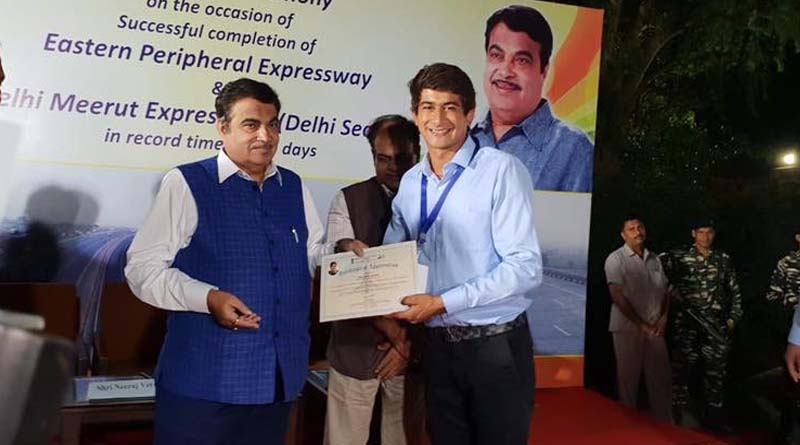 The company and its performance

Found by Gunit Bapna, Knit Infrastructure Pvt Ltd is a civil infrastructure company that operates to construct flyovers, bridges and underpasses. Currently operating in Gujarat and Uttar Pradesh, the company’s members are experts into fabrication. Knit holds a team of 12 site engineers. They have more than 300 labour workers who have been working in PAN India. Started in November 2018, the company made a turnover of 80 lacs in the start, this financial year, 2019-20, it witnessed a turnover of over 3.5 crores. And interestingly, they still have a 12 crore project in hand.

It has happened for the first time in India that the country is seen using 18.75 m width PQC paver for laying Pavement Quality Concrete on Vadodara Mumbai Expressway PKG -4. This is a sub-contract Knit has received from the Ashoka Buildcon Ltd. Knit feels the pride to have the opportunity to execute the project. They have already completed 50% of the project as of now.

Gunit belongs to the commerce background. However, his passion got him to the field of engineers. While he lacked formal education in the sector, the founder definitely went through a big number of challenges and difficulties. However, Gunit’s passion was all that took for him to work hard and bang on to the major client projects such as Receding water Resorts Pvt Ltd. and Ashoka Buildcon Ltd.

Gunit’s inspiration to start this infrastructural business was his interest in constructing the flyovers, bridges and roads. He felt proud of thinking that how beautiful it is to serve the people of the nation by building strong roads and bridges. He also mentions about the CEO of Ashoka Buildcon Ltd., Mr Sanjay Londhe who has always been a guide to him on civil infrastructure.

What success means to Knit?

Getting new projects every year and the completion of the projects with good quality development is what success means to Knit. Currently, other than booking of 12 crores, they have delivered projects worth 4 crores in three different states of India. The company seems to be making a turnover of 15 crores by the next financial year.

A major challenge to this company has been its Inventory management. Managing the material and taking it from one site to the other has been a big challenge that the company is working on for its further success.

And most importantly, the company would also be raising funds in the coming year to make it to more projects and grow both vertically and wide.

Success in terms of growth to Knit is also about completion of the projects they have in hand. Something that makes the company proud and stands in the market is the quality they bring in their deliverables. They use special shuttering formworks that let them complete the work in less than 50% of the expected time not compromising on the quality.

While India has a huge scope of development in terms of civil infrastructure, the company looks forward to growing widely throughout India. They believe that they need to cover thousands of kilometres of unbuilt roads of the country. They, therefore, look forward to making turnovers of 100 crores while they have already reached their target of 15 crores. It is the huge support of the workers of the company that work as a team and have contributed Knit in developing so far!

The Importance of Consolidated Financial Statements

LIRQS – Now, you can create your own lyrics with Music

Author startupurbanPosted on July 8, 2021July 15, 2021
Founder – Venkata Rajendra B Co-founder – Mallikarjuna A Website – LIRQS Are you a die heart music lover and passionate writer? Do you...
Read More

Author startupurbanPosted on July 9, 2017August 14, 2020
As well you all know that today digital and electronic technology plays a vital role in our day to day life. The digital media...
Read More

Foodeterian: From an idea to becoming the fastest growing food delivery startup in Bhubaneswar

Author startupurbanPosted on February 11, 2022February 11, 2022
Life has become a marathon where everyone seems to be running, and in this marathon of life people no longer wait for newspapers to...
Read More