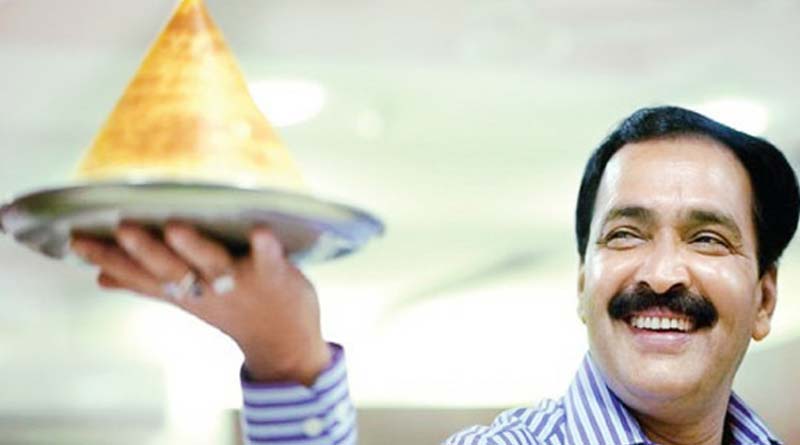 Jayaram Banan, the owner of SagarRatna, has an engaging life story to share with the readers. Being the most abused child at home, he today owns over 30 restaurant outlets in the North India. These outlets are all about serving perfect dosas and idlis to the people in North India. He hails from Karkala, a small village in Karnataka’s Udupi district. The boy right from his childhood to the day he achieved his success in life has a very inspiration story behind. He is a man who turned the typical roti and butter chicken lovers to love his Dosas and the south Indian food. Today he not just owns outlets in North India but could spread his outlets worldwide including Canada, North America, Singapore, and Bangkok.

Jayaram’s childhood was not a good one. His childhood was filled with terror and apprehension. Always beaten by his father, he has grieved the days when his father put chili powder in his eyes for it being his punishment. At 13 years of age, Jayaram Banan failed in his school. Being scared of his father’s punishment, he stole money from his father’s wallet and ran away from home. He took a bus to Mumbai. He found a resident from his town who saved him by getting him a small job at a canteen in the city. While he did not have any plans about what he would do, where would he run, he was lucky enough to get a job to wash dishes in a city named Panvel. Though he worked hard at work, he was unfortunate enough to be beaten up by his boss with a chappal. Jayaram Banan says that taking this into consideration, he turned out to be working hard and got promotion as a waiter and then as a manager. Consequently, his labour and struggle were not meant to be working under someone forever.

With time and experience, he always thought of opening a South Indian restaurant in Mumbai but soon realised that there were already many of them in the city. Not wanting to venture in a town where there was no scope, he planned to move to Delhi. Dosas, in those days, were quite costly. He intended to change that. He says, he planned to offer quality dosas at the halwai rates.

Finally, in 1986, he opened his first outlet and made ₹470 on day one. He named this outlet as ‘Sagar.’ He concentrated on customer satisfaction and created such a menu, which people willingly and excitedly started gathering to his shop. Within no time, he got his outlet prevalent in the locality.

Later, he opens a hotel named ‘Lodhi’ after 4 years of success. Here he charged 20% more than the original charges of his first restaurant. He is proud enough to say he served the best sambhar in the city. And it was after this success of new store; he added Ratna to the name. The brand called as ‘SagarRatna’ soon built an immense popularity across the state.

The story of Jayaram Banan is an inspiration to millions of people who want to be successful in life. This man has taught us to be courageous and proves that hard work and dedication cannot stop you from achieving success. Have faith in yourself and do what you dream to do!

Nisha Dutt, an admirable leader and a CEO of Intellecap has proved ‘Sky is the limit’

Author startupurbanPosted on March 8, 2018July 22, 2020
Founder – Deepak Bansal Co-Founder – Devleena Neogi Website –  GingerCup Founded in: 2015 What made you strike this business idea? What inspired you to start...
Read More

How a new-age creative agency was founded in 2020

Author startupurbanPosted on March 1, 2021March 1, 2021
In Ahmedabad, amidst the pandemic, Kushal Kahar and Bhawana Munet moved from being employees to entrepreneurs and started up a new age creative agency....
Read More

Author startupurbanPosted on May 31, 2018July 13, 2020
Website – MereExams   You just gave your board exams. Your results are out. Now what? This is the question most students, as...
Read More

Author startupurbanPosted on July 21, 2017July 20, 2020
The London headquartered company, Hubble, which began its operation in 2014 promises you by offering flexible and convenient office spaces. And, these spaces are...
Read More